Earlier this month I presented CLEs for both the Defender General’s Office and the VBA’s Bankruptcy Section.  At each, we discussed Rule 3.3 and a lawyer’s duty of candor to the tribunal.

A quick search of this site shows that I often include questions on the rule in the #fiveforfriday quiz.  Substantive posts, however, are exceedingly rare, limited, it seems, to this post on Rule 3.3(d) and the duty of candor in an ex parte proceeding.

While not often a topic I address, it’s a topic I hear about, whether by formal inquiry of bar counsel or by questions posed at CLEs.  The inquiries & questions boil down to this: “having learned that a client or witness lied, what do I do?”

When I get the question at CLEs, I respond by asking the audience “what’s the first thing you have to do?”  Two answers are common:

In my view, neither is the right answer.

Let’s look at Rule 3.3(a)(3).  The section relevant to this post states that “a lawyer shall not knowingly:

Stated differently, the rule does not say that

So, what are “reasonable remedial measures?”  The comments provide guidance.  Specifically, Comments [10] and [11].

Per Merriam-Webster, as an intranstive verb it means “to present and urge reasons in opposition.”  With an object receiving it – for instance, a client – it means “to say or plead in protest, reproof, or opposition.” To me, the duty, then, is to protest against the false evidence having been offered, present the client with reasons to correct it, and urge the client to do so.

Harsh?  Yes.  The opening sentence to Comment [11] makes that clear:

Why so harsh?  The next sentences provide the answer:

I don’t know how often this arises in practice.  For now, if it does, remember: upon learning that a client or witness has provided false evidence, neither “withdraw” nor “inform the court” is the first step. 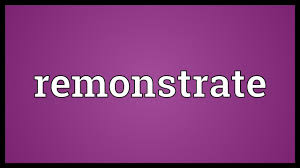 One thought on “A lawyer’s duty upon learning that a client or witness presented false evidence.”