To me, attorney wellness is much more than the staggering rates at which behavioral health issues affect lawyers, their non-lawyer assistants, judges, and law students.  Well-being also includes enjoying the light moments whenever possible.

The very first rule in the Rules of Professional Conduct requires lawyers to provide clients with competent representation.  It’s widely recognized that Vincent Gambini’s cross-examinations in My Cousin Vinny more than satisfied the duty of competence.

Time to add another great legal mind to the list: Judge Merrick Garland.

Yesterday, the United States Court of Appeals for the District of Columbia Circuited issued this opinion.  Judge Garland opened the opinion as follows:

Keith Lee of LawyerSmack is one of the best follows on Twitter.  Yesterday, he commented on Judge Garland’s references to My Cousin Vinny.  Lee’s tweet thread is here.  AboveTheLaw blogged on both Judge Garland’s opinion and Lee’s tweets.

If you’re a fan of the movie, I recommend the opinion, Lee’s tweets, and the ATL blog.

Personally, I thank all three for contributing to my well-being, while also incorporating the duty of competence. 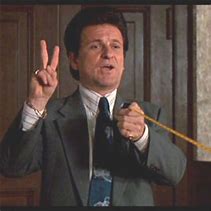 Last December, I blogged on ABA Formal Opinion 479.  It’s an advisory opinion in which the ABA’s Standing Committee on Ethics and Professional Responsibility stressed that lawyers should not assume that they are free to disclose client information merely because the information is in a public record.

That’s a point that I made in my post Hey Lawyers! STFU!

To bring you up to speed, here’s the analysis with respect to current and former clients:

On March 6, the ABA released advisory opinion 480.  The opinion purports to address the duty of confidentiality as it applies to lawyers who blog.  The ABA Journal and Above The Law reported on the opinion.   In addition, Trisha Rich and Allison Martin Rhodes, law partners at Holland & Knight, blogged on the opinion here.

The opinion strikes me as a bit odd.

First, for an opinion that purports to address lawyers who blog, it really doesn’t.  Indeed, parts of the opinion come off as, how shall I say it, “less than tech savvy.”  For example, the opinion refers to Twitter accounts as a “microblogs . . . that ‘followers’ (people who subscribe to a writer’s online musings) read.”

Twitter is more than a place to read online musings.  Per the Pew Research Center’s latest numbers, 24% of U.S. adults use Twitter, and 46% of those who do visit Twitter every day.  Speaking only for myself, Twitter is where I get my news. I don’t go for “musings.”  I doubt so many Americans do either.

Next, as Attorneys Rich and Rhodes point out,

Indeed, the opinion makes me wonder why someone asked for it.  I mean, really.

As many of you know, whether by following this blog or attending my CLE presentations, I often urge lawyers not to fear tech.  Tech doesn’t require new rules. It’s simply a new forum in which the same old rules apply.  For example, many of the questions you should ask a potential cloud storage vendor are remarkably similar to the questions you’d want answered before renting a unit at the Store-All facility out on the Old County Road.

Again, as Rules 1.6 and 1.9 make clear, unless one of the exceptions is met, IT IS NEVER OK TO REVEAL CLIENT CONFIDENCES.

Anyhow, the opinion isn’t entirely a restatement of the obvious. It includes a helpful tip on a pet peeve of mine.

At many of my seminars, lawyers pose “hypotheticals.”  Some are so detailed that I’d guess that half the audience knows who the lawyer is talking about.

Remember, “but I was at a CLE & said it was a ‘hypo’!” is not one of the exceptions listed in Rule 1.6.  Indeed, as the most recent ABA opinion reminds us:

Finally, as I alluded to above, the opinion reinforces the notion that “it’s public record” is not license to reveal information. On that point, the opinion is not without criticism.  Check out the post from Above The Law.   Among other things, the author, Robert Ambrogi, writes:

Interesting point.  I don’t necessarily disagree. However, on the flip side, what if you went through a messy divorce 10 years ago?

Imagine that it went to trial.  At trial, details emerged that remain embarrassing today.  Yes, the trial was public, but, really, in label only. Nobody went, certainly not the press.  The details are not, by any stretch of the imagination, generally known. The only way anyone could access the details would be by going to the great length of ordering a transcript.  Public? Yes.  Generally known? No.

How would you feel if your lawyer blogged the details tomorrow?

In any event, from a practical standpoint, in law & life, I think it’s often best to heed the words of Thomas Edison:

“You will have many opportunities
to keep your mouth shut.
You should take advantage
of every one of them.”

Was That Wrong? is a semi-regular column on Ethical Grounds. The column features stories of the absurd & outrageous from the world of legal ethics and attorney discipline. My aim is to highlight misconduct that I hope you’ll instinctively avoid without needing me to convene a continuing legal education seminar that cautions you to do so.

Today’s lesson comes courtesy of two lawyers who were disbarred in California. As I alluded above, it’s a love story: our disbarred lawyers are married to each other!!! The story has been covered by Above The Law, the California Bar Journal, and OC Weekly.  I recommend the OC Weekly’s post.

Someday I hope to launch a YouTube channel tied to this blog.  When I do, I’ll adapt Was That Wrong entries to the screen.  Here’s how I envision scripting today’s:

For more, here are the previous entries in Was That Wrong?

So, you want to store client data in the cloud? Excellent! Odds are it’ll make you more efficient.

What are your duties under the rules of professional conduct?  Good question.

In my view, a lawyer has a duty to take reasonable precautions to protect client information from unauthorized access or disclosure.   The duty applies no matter the “place” that the information is stored.  That is, the cloud is a “place to store client information” in the exact same sense as a storage facility out on the old county road.

For more, here’s my post The Cloud: What Are Reasonable Precautions?

Now, about that headline.

Jeff Bennion has a great post over at Above The Law: How Are Lawyers Supposed  To Have More Security Than HBO?  It’s well-worth the few minutes you’ll need to read it.  A summary of his tips:

Only 109 hours, 44 minutes until The Dragon & The Wolf.  Until then, just as I’m sure you’ll take reasonable precautions to avoid spoilers, do the same to avoid the inadvertent or unauthorized disclosure of client information.

Was That Wrong is a semi-regular column on Ethical Grounds. The column features stories of the absurd & outrageous from the world of legal ethics and attorney discipline. My aim is to highlight misconduct that I hope you’ll instinctively avoid without needing me to convene a CLE that cautions you to do so.

Today’s story comes thanks to Joe Patrice at Above the Law: Attorney Forges Judges’ Signatures Over 100 Times.  Earns Jail, Sick Burn.  Yesterday, the attorney was sentenced to 364 days in jail, and 10 years probation, for forging judges’ signatures on 114 structured settlements and filing them with the court clerk.

As regular readers know, this is the point in the column where, using the same structure as the “was that wrong” conversation between Costanza and his boss, I’d draft an imaginary colloquy between the attorney-forger & the judge who sentenced him.

No, today’s story reminds me more Bizarro Jerry, the episode in which Kramer is fired from a job that he doesn’t even have.  The relevant segment:

The scene is HERE.  The full script is HERE.

Returning to today’s story, as Patrice wrote on the ATL blog,

Here’s how I envision it in Bizarro world:

Do any of these sound familiar?

The story is a cautionary tale entitled How Technology Illiteracy Can Cost Solos Big Money.  It’s by Carolyn Elefant and appears on the Above The Law blog.

Don’t have a lot of time?  Ok.  At least check out the part where Carolyn writes “I want to commend every solo and small firm lawyer to read this train wreck of a decision closely to learn how not to run a law office.”  The decision was issued last month by the United States District Court for the Eastern District of New York. If you don’t have time to read the decision, Carolyn’s blog summarizes it nicely.

Take the time to read the blog and the decision.  The money (and law license) that you save might be yours.

Most of you know that when it comes to legal tech, I highly recommend Robert Ambrogi’s Law Sites Blog.  Ambrogi also writes a This Week In Legal Tech column for Above The Law.

Here’s the most recent column: 6 Questions To Ask Before Selecting A Practice Management Platform.

A summary of the 6 questions:

Still drinking coffee this morning?  You’ve got time to try this week’s legal ethics quiz before you hit the trails or slopes.

I’ve written lately on using the rules to increase access to legal services.  A few of my posts referenced compassion.

This post isn’t part of that series.  Rather, I’m simply sharing a story that I liked. A story that involve compassionate lawyers working pro bono not just to increase access, but to make their community a better place.

The story, by David Lash, is at Above the Law and is entitled A Remarkable Experiment Taking Place in Los Angeles.  Give it a read.  Here’s the closing sentence:

“And in the middle of this revolution of outreach are the lawyers, again demonstrating the unique and powerful way that only the justice system, particularly when fueled by collaborating experts from the most compassionate and expert legal aid organizations, can touch the lives of those most in need as can no one else.”