I couldn’t imagine a better tie-in to the 116th #fiveforfriday legal ethics quiz than the 144th Kentucky Derby!

Not only that – they’re major horse racing fans and will be at Churchill Downs for tomorrow’s run for the roses.  Liz and Wesley were kind enough to indulge me in an e-chat for today’s column.

Ethical Grounds:  So Liz –  tomorrow, you and Wesley will be at the 144th Kentucky Derby.  144!  We’re only up to 116 #fiveforfriday quizzes!  What number Derby will this be for the two of you and, more importantly, how’d 2 attorneys from Vermont get so into horse racing?

Liz  This is Wesley’s 11th Derby and my 10th. I missed 2011 because of a 2 week trial. Here’s how we started going. Wesley’s father went to college at the University of Louisville and loves the Derby, so it was always a thing in Wesley’s life when he was growing up. In 2008 we all decided to go together. That was the year Big Brown won, and also went on to win the Preakness. We were so excited at the idea of a Triple Crown winner that we went to the Belmont that year too. We were hooked.

EG: Interesting you mention 2008.  That Derby sticks in my memory for two reasons. First, I watched at a bar.  The bartender was running a Derby pool.  It was a blind draw – names straight out of a hat.  The place was so busy that the pool filled up, so she did another, then another, then another.  Eventually there were 6 pools.   The bartender had Big Brown in 5 of the 6!!  Umm, yeah, this isn’t rigged!!  Now, second, a sad memory.  I got into the pool.  Guess who I had? That’s right – Eight Belles.  So sad.

Anyhow, for the uninitiated, what are some of the best aspects of horse racing and what’s Derby day like?

Liz:  We were in the infield and could not see that Eight Belles broke down. This was before everyone had smart phones. I cashed my ticket on her before I knew what happened.

Horse racing is really different from any other sport. For bettors it’s a game of skill and study and probability. (how many sports involve homework?!). For sports fans it’s a contest where sometimes the best wins but sometimes gets upset by a serious underdog. For adrenaline junkies (and people with short attention spans) it’s fast and thrilling. For people who love horses its horses. It’s surprisingly accessible; if you go to a race and talk to enough people eventually you’ll meet someone connected to a horse in some way.

EG:  In legal ethics, conflicts of interest are always a hot topic.  Do you think trainers have conflicts? Specifically, it’s not uncommon for some of the trainers to enter multiple horses in a single Derby.  Todd Pletcher has FOUR horses in this year’s race!  Do a trainer’s duties to Owner 1 conflict with the trainer’s duties to Owner 2?  Do owners provide informed consent to allow the trainer also to train a competitor?

Liz:  It feels like a conflict but owners go in knowing this happens. Unlike in legal cases, generally, everybody in the race has the same goal, which is to win. And since jockeys get paid a percentage they have an incentive to do what they can to win. A trainer’s job is to train the individual horse to his or her potential; if a trainer is known to three races, that trainer won’t have clients very long.

Also, different horses have different running styles. Some like to get out front and keep the lead. Some like to let another horse set the pace and make up ground later. Some are deep closers – the ones who zoom from last to first at the very end. The Derby doesn’t usually favor deep closers. Trainers know their horses’ styles and can advise the rider. But once the gate opens, it’s all up to the rider to help the horse run his or her best race.

EG: I often blog about Rule 1.1 and the duty of competence.  I’ve also posted more than one blog that references my Irish heritage.  So, why do the Irish horses seem to be incompetent when they run at Churchill Downs?  Mendellsohn won the UAE Derby and is 5-1 (as of right now). Could this be the year that the roses presented to the winner are replaced with

Liz: Mendelssohn didn’t just win the UAE Derby, he smoked the field by 18 lengths. (The place finisher was a filly named Rayya, who will run in the Kentucky Oaks on Friday.) It’s often a little bit of a wildcard when you have a horse that ships in for a big race like this. But Mendelssohn has travelled all over and that doesn’t seem to bother him. Maybe he’s sitting on another win!

EG:  Last year, I saw the pics that you and Wesley posted from Churchill Downs.  Without a doubt, each of you satisfied the duty of competence insofar as it relates to horse racing tradition & etiquette.  Namely, you each nailed the Derby Day outfit. 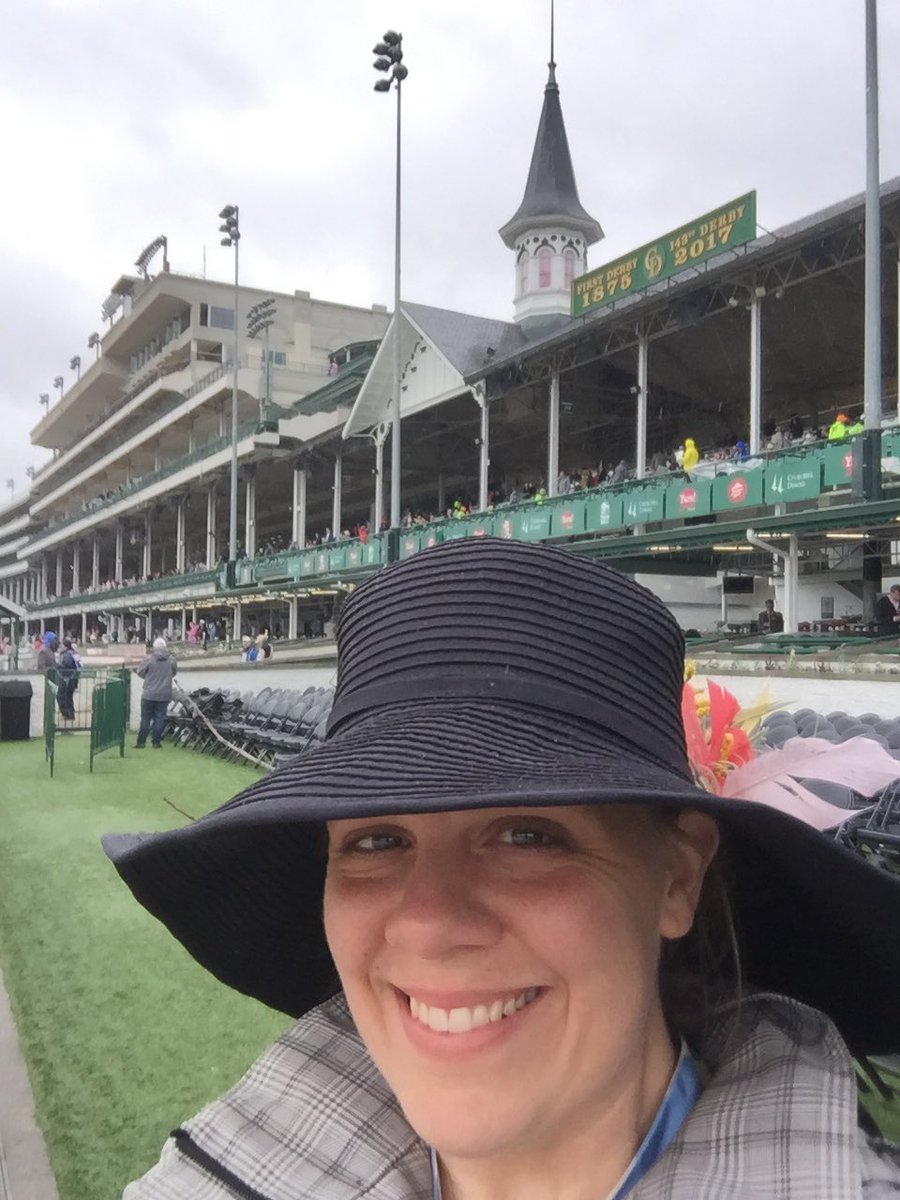 How about this year?  First, let’s talk hats.  Do you bring only one?  Do you bring several and choose on Saturday morning?  What do you with them the rest of the year?  Will Wesley be wearing a hat? Pastel suit? Seersucker suit?  Pastel seersucker suit?

Liz: I have a hat for Oaks Day and a hat for Derby Day. I had them decorated by the Valley Flower Company in White River Junction. There are 3 horses in the Derby this year with high-energy names: Firenze Fire, Bolt D’Oro and Flameaway, so I had my Derby hat designed to look like flames. Wesley will probably wear a jacket and tie (no seersucker this year), and a hat from the stable in NY that we participate in – Zilla Racing Stables.

EG:  I’m sure every lawyer has had at least one hearing, trial, or appellate argument that went so poorly that, upon leaving, the lawyer felt like he or she had violated Rule 1.1’s duty of competence.  Do the horses who finish last, next-to-last, or way off the lead know that they didn’t do well?

Liz: I think horses who are used to winning know when something’s different if they don’t go to the winners circle. Race horses generally try really hard, and they definitely know when they’ve done something good. And they’re very smart.

EG: Rule 3.5 prohibits lawyers from engaging in undignified or discourteous conduct that is degrading or disruptive to a tribunal. A few years ago, my brother and I brought our mom to Saratoga.  After the first race, she started picking thru the tickets that bettors had tossed onto the ground.  WTF Mom!!!  I don’t know that the track counts as a tribunal, but her conduct struck us as undignified and degrading to her sons!! Nobody throws away a winner, and we aren’t peasants who need to scrounge thru the trash!!!   Guess what??? She found a ticket worth $2!!

Query: merely by scrounging, did she commit a violation of the horse racing rules of conduct???

Liz: Everybody does this, and your mom was spot-on! There are people who go to the track with mini flashlights specifically for leafing through trash bins to find uncashed tickets.

EG: You and Wesley are multi-jurisdictional fans. Besides the Triple Crown tracks, what are some of your favorites and why?

Liz:  Saratoga! Because it’s summer and it feels like vacation. Also, it’s close. We also like Aqueduct. That place feels like a racetrack. It’s a little gritty, and it’s full of interesting people. Gulfstream Park in Florida is nice. So are Del Mar and Santa Anita in California.

EG: Do you know all the words to My Old Kentucky Home? Will you get misty eyed as it plays?

Liz: I do, and it depends on how many mint juleps I’ve had.

EG:   Wouldn’t #fiveforfriday be a good name for a race horse??  Wait, hashtags might not be allowed. If not, I’ll settle for fiveforfriday.

Liz:  It would be a great name for a horse! We checked the Jockey Club registry, and the name isn’t taken yet. Perfect!

EG: Finally, I often caution lawyers to manage client expectations. So, knowing that you can’t guarantee a result, give us your best prediction for the race.

Liz:  Justify seems hard to beat, but he’s lightly raced and has never been challenged in a big field of horses. Wesley likes Bolt D’Oro and Vino Rosso. I also like Bolt D’Oro, and I also think Enticed could be sitting on a really big race.

Thank you Liz and Wesley!!!

Lawyer called me with an inquiry. I listened, then replied: “the rule applies if you’re holding them in connection with a representation.”

Which involves a different set of the Rules of Professional Conduct than the others?

“A lawyer shall make reasonable efforts to expedite litigation consistent with the interests of the client.”

Attorney called me with an inquiry.  I listened, then replied, “before you disclose, the first step is to refer it up the ladder to a higher authority and, if warranted by the circumstances, to the highest authority that can act.”

Given my response, it’s most likely that Attorney represents:

John Tweedy was a lawyer. He graduated from Columbia Law School.  While there, he met a woman named Penny Chenery.  Penny was a student at Columbia Business School. The two eventually married.

To call Penny “competent” would be a gross understatement.  Penny is one of the most succesful horse breeders in U.S. history.  She bred and raced the horse that many consider the greatest of all-time.  The horse holds the record for the fastest time in The Kentucky Derby.

The horse was born in 1970.  Penny’s father had “won” the horse by losing a coin toss.  That is, in 1969, Penny’s father and another breeder agreed to flip a coin to determine who would receive the first choice of the next two foals to be sired by Bold Ruler, the 1957 Horse of the Year.

Penny’s father lost the coin toss.  The winner chose a horse named The Bride, who you likely have never heard of.  Penny’s father was left with a horse who I’m quite certain you’ve heard of.

Name the horse that Penny’s father won by losing a coin toss.