Person calls Lawyer.  Person tells Lawyer “I have an attorney, but I’d like a second opinion.”  Lawyer is not otherwise involved in the matter in which Person has an attorney.

Lawyer must not discuss the matter with Person unless Person’s attorney consents.

Absent a written agreement between Lawyer & Client saying it will be treated otherwise, a flat fee paid in advance of any services being performed by Lawyer ____________:

Rule 1.15(c) requires fees paid in advance to be deposited in trust until earned.  The only exception is a fee that the lawyer & client have agreed to treat as earned upon receipt and that has been memorialized as required by Rule 1.5(f). I discuss the distinction in this CLE video: Flat Fees, Misappropriation & Trust Account Scams (35 minutes).

Per Rule 1.18(b), “even when no client-lawyer relationship ensues, a lawyer who has had discussions with a prospective client shall not use or reveal information learned in the consultation” except as otherwise permitted or requied by the confidentiality rules that apply to current and former clients.

For conflicts purposes, which do the rules treat differently than the others?

For A & B, Rule 1.11 permits screening when lawyers move to and from government practice.  Option C is direct from Rule 1.10(a), the rule that otherwise imputes conflicts to all members of the affected lawyer’s firm.

This is my personal all-time favorite and is my only concession to 200 being anything other than something.  There’s a hint into the intro.

It’s a good thing Michael Scott isn’t a lawyer.  In an episode of The Office, Michael ran over a co-worker in the company parking lot. He was driving a company car. When asked by an HR rep if the accident happened on company property, Michael replied:

What legal theory found in the Bill of Rights did Michael mistakenly think rendered him and the company “fine?”

DOUBLE JEOPARDY.  Then after Toby remarks that he doesn’t think Michael understands how this works, Michael adds “I’m sorry.  What is Double Jeopardy?” 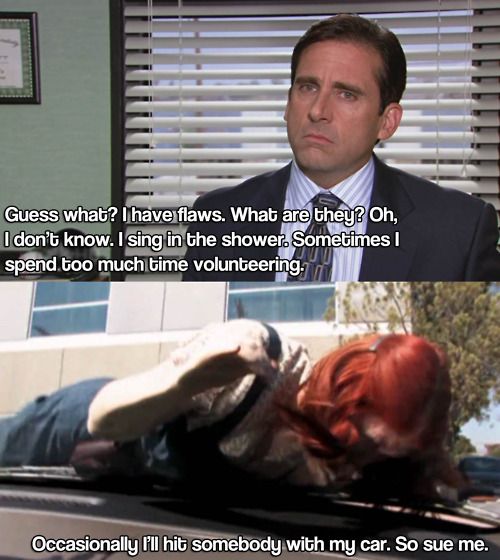