Over the past 21 years, I’ve seen some incredibly bad behavior by lawyers.  I’ve never seen anything like the story I’m about to recount, a story covered by Above The Law and Professor Bernabe’s Professional Responsibility Blog.  I’m not the only one. Indeed, the story is one of  behavior so bad as to cause opposing counsel to file a request for relief that ended with:

I can hear you now: “Mike, tell us more! What was this behavior?”

Negotiations (and discovery) weren’t pleasant. So unpleasant that, last month, the insurance company’s lawyers asked a federal court to dismiss the complaint or, in the alternative, to disqualify plaintiffs’ attorney.  They also requested a restraining order against plaintiffs’ attorney and a protective order preventing plaintiffs’ attorney from deposing defense witnesses. A memorandum in support of the request opened with:

This is where my job as tour guide ends.  To continue the journey, the insurance lawyers’ memorandum in support of the request is here and a declaration from one of the lawyers is here.  I suspect the odds that you’ve seen conduct as egregious are greater than the odds that I will win next year’s Boston Marathon.

The Above The Law post includes an excerpt of plaintiffs’ attorney’s response: 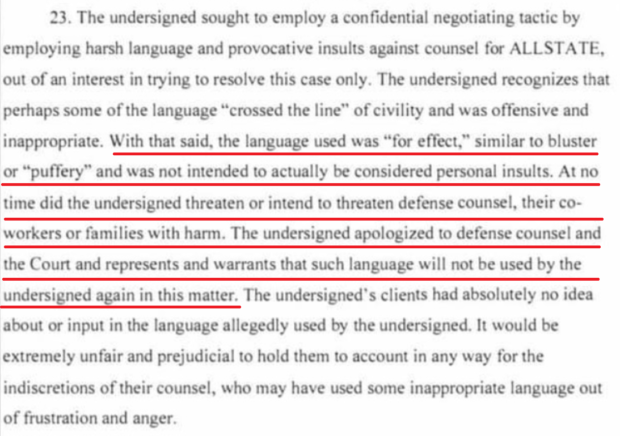 Umm, that’s not the kind of puffery I blogged about.  Also, the attorney’s apology and promise not to do it again make me think of Costanza: was that wrong?  Perhaps the lawyer will soon join those who learned the hard way that the answer is “yes.”

For now, and per an update on Above The Law, the court ordered the plaintiffs’ attorney to appear and show cause why the insurance company’s requests for relief should not be granted.  The hearing is set for December 16.