It’s been a while since I’ve blogged, and even longer since I’ve subjected readers to the mantra upon which this blog was built:  competence includes tech competence.

With that in mind, an update!

A few weeks ago, the Commercial and Federal Litigation Section of the New York State Bar Association released its updated Social Media and Legal Ethics Guidelines.  First released in 2014, the Guidelines are one of the leading resources on a lawyer’s obligations under the rules of professional conduct with respect to social media.  While based on New York’s rules, the Guidelines cite to advisory ethics opinions from across the country. Here’s an outline distilled from the table of contents:

There’s also an Appendix that includes a list of some of the more popular social media platforms, as well as a glossary of social media’s more commonly used words & phrases.

(no, I’m not sure that “social media’s more commonly used words & phrases” is proper grammar.  But I tend to write like I speak, and if I said it out loud, you’d know exactly what I meant.)

Anyhow, the Guidelines are a great resource.  I recommend bookmarking the link.

Finally, thank you Dave Carpenter for the h/t that the Guidelines had been updated!

The rule prohibits communicating with a represented __________:

This is Rule 4.2.  It applies to “persons and matters,” which is broader than “parties and cases.”

A lawyer may not accept representation in a matter that involves an area of law in which the lawyer does not possess the requisite level of competence to provide competent representation to the client.

The rules rarely reference specific practice areas.   However, there’s one rule that specifically references both criminal cases & divorces.  It’s the rule on:

Lawyer represents Client in an appeal.   Opposing Counsel filed a brief.  The brief fails to cite to a case in the controlling jurisdiction that Lawyer knows to be directly adverse to Client’s position.  By rule, Lawyer’s reply brief:

This is Rule 3.3(a)(2).  Failure to disclose violates the duty of candor to the tribunal.

48 years ago today, the Court issued an opinion that garnered headlines nationwide.  The opinion overturned the conviction of a famous athlete. The athlete had refused to report for induction to the military after his application for conscientious objector status had been denied.

A unanimous Court (8-0, with Justice Marshall recusing himself) concluded that the athlete’s beliefs were “surely no less religiously based” than those that had been approved in granting other applications for conscientious objector status. 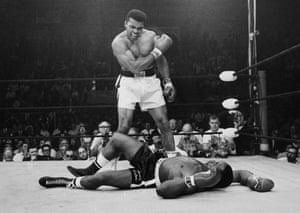