I rarely write or speak about the attorney advertising rules.  I’ve written and spoken on the legal ethics of puffery and paltering.

“141” gives me an opportunity to write about all three . . . and basketball! With readers getting a chance to play “bar counsel” at the end.

My earliest memory of Bird is of spending a day scowling at my mother.

It was March 26, 1979.  That night, Bird’s Indiana State Cyclones were to play Magic Johnson’s Michigan State Spartans in the NCAA Championship Game.  Apparently oblivious to the import of the contest, my mother dragged us to Lafayette Square in Washington D.C. to watch Menachem Begin & Anwar Sadat sign the Israel-Egypt Peace Treaty at a White House ceremony hosted by President Carter.

Mom, seriously?  Historic peace agreements over college basketball?  The gall! I was convinced we’d not make it back to the hotel in time to watch the game.

Six years later I was a freshman at Boston College, even more infatuated with Bird than I was as a 7th grader.  By then, he’d heroically led my beloved to Boston Celtics to the first 2 of what would be 3 NBA titles.  I didn’t like much about BC, and eventually transferred to UVM.  But, that freshman year, my anticipation grew with each moment that fall slowly ticked towards basketball season: I’d get to see Larry play in person for the first time.

The night finally arrived.  I don’t remember what game it was, but it was early in the season.  I took the Green Line from BC to North Station and headed to the ticket window.

I assume the ticket guy was trained in recognizing “sticker shock.” Because as I stood in stunned silence after our initial exchange, he said “I also have some obstructed view seats that are a lot cheaper.”

Yes! I asked what “obstructed view” meant.  Ticket Guy said something like “you probably won’t be able to see the banners.”

Here’s a picture of the old Boston Garden.  Note: the upper deck hangs over the lower bowl of seating.  While it’s not entirely obvious from the image, the rows in the lower bowl extended much further back than it appears.  The upper deck hung so low as to obstruct the rafters & the scoreboard from the view of people seated in the back rows of the lower bowl.

Back to my story.

It took me a nano-second to respond “I’ll take one.”  I didn’t care that I wouldn’t be able to see the banners from my seat. I’d be able to see Larry!

To his credit, Ticket Guy was correct: upon arriving at my seat, my view of the banners was entirely obstructed by the underbelly of the upper deck.

So was my view of the scoreboard that hung over center court.

Here’s where it got even more interesting.

In reality, the upper deck didn’t “hang” over the lower bowl.  Rather, the upper deck was supported by giant steel girders. I couldn’t find a great picture, but this one will do: 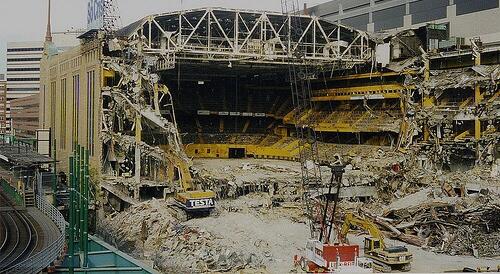 That’s the Garden mid-demolition.  On the right, a yellow girder is visible.  There’s also one on the left that’s covered in dust.

The girders were wider than it looks in the picture: slightly wider than my body.

How do I know?

Well, because someone decided that it’d be a good idea to put seats behind the girders. Not just put them there, but sell tickets to sit in them!

And the seats were not “sort of behind” the girders.  They were squarely behind them.  That’s right: that night, I had a perfect view of the mid-point of a 3-foot wide steel beam.

Was my view of the rafters obstructed by the balcony’s overhang? Yes, yes it was.

And my view of the court was COMPLETELY BLOCKED by the girder!

If you chose the final option, you are banned from this blog forever!

Seriously, you are.  Stop reading now.  Go away.

My theory? Ticket Guy violated Rule 4.1.  The rule prohibits false statements of material fact.  Per Comment [2], “misrepresentations can occur by partially true but misleading statements or by omissions that are the equivalent of affirmative false statements.”

There you have it.  That’s how Larry Bird’s birthday lends itself to an analysis of the legal ethics rules. He truly is The Legend.

(this one happened again this week, so I’m going to keep asking)

Attorney called me with an inquiry.  Attorney said “Mike, I represent a witness.  The defendant’s attorney keeps contacting my client directly. I asked him to stop.  He said he doesn’t need my permission because my client is only a witness, not a party.  Is he right?”

What was my response?

Attorney called with an inquiry. I listened, then replied “the rule applies to statements of fact.  The Comment suggests it doesn’t apply in negotiations or to mere ‘puffery’ to opposing counsel.”

If a lawyer sells her practice, the rules require her to cease the private practice of law in the geographic area in which she practiced.

Lawyer called me with an inquiry. I listened, then said “yes, for the sole purpose of paying service charges or fees on the account, and only in an amount necessary for that purpose.”

What did Lawyer call to ask?

Speaking of Larry Bird and ethics, as I mentioned, Bird went to Indiana State. However, he started his career at a different university.  Recruited to play basketball there, he dropped out of school after a few weeks, overwhelmed by the size.

Had Bird stayed, he’d have played for a very famous coach.  The coach often found himself under scrutiny by the NCAA’s equivalent of “disciplinary counsel.” The coach once skipped an NCAA-mandated ethics seminar, stating:

“I would have rather listened to Saddam Hussein speak on civil rights than to have listened to some of the [NCAA officials} who have spoken on ethics to this point.”

Who is the coach?