Anyhow, a few nonlawyer friends poked fun at lawyers in response to yesterday’s post on the Florida Supreme Court’s opinion on judges and their Facebook friends.  They found it comical that, only in the law, would you need 2 pages of “mumbo jumb” to define the word “friend.”

But, as I stare at 8 inches of snow, I wish more of you who wished for snow for the holidays would’ve consulted a lawyer before transmitting your wish. Because while we might have needed a lot of mumbo jumbo to define “friend,” we would have used that mumbo jumbo to specify that your wish:

Axl did not sing about November Snow. This is ridiculous! 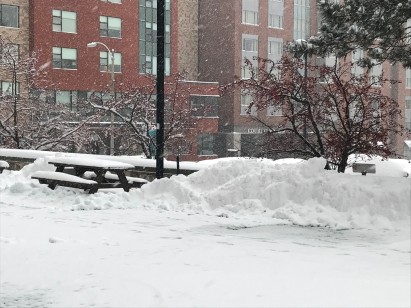 But it’s my fault.  My superstitions failed me.

I’m pretty lazy.   I put off even the simplest of tasks as long as possible, and then some.  One task that falls prey to my procrastination more often than others is changing over to winter tires.  Not this year.

No, this year I dropped off my car on November 6.  Part of my thinking was “if I put them on early, it’ll never snow!”  It’s like when I make sure to pack an umbrella when I drive to Fenway.  If I do, it won’t rain.

Fresh off my new lock screen having won the World Series for the Red Sox, I was confident I’d guaranteed a mild winter.

Anyhow, cabin fever is already setting in.  But it’s not all bad.  The weather resulted in a very positive experience on the way to work.

I slipped and fell as I walked from the parking garage to the office this morning.  Two college-aged guys were walking from the other direction and saw me fall. I was sure they’d mock me.

One clapped and gave me a high-five as he said “you saved the coffee! that’s awesome!”

He was right. I didn’t spill my coffee.  Years of crowded bars finally paid off.

Do the same for someone today.  You never know what a difference it’ll make.

Lawyer called me with an inquiry. I listened, then said:

What did Lawyer call to discuss?

With respect to legal ethics, the phrase “going up the ladder” is most often used in connection with the duties of attorney who:

By rule, what must Attorney do before settling ?

What’s the topic of the rule associated with these words & phrases:

Jennifer Walters graduated from the UCLA School of Law and eventually practiced law at the firm of Goodman, Lieber, Kurtzman, and Book.  There, she represented Arthur Moore, a client who had been charged with robbery.   The charge was dismissed after Walters successfully argued that all of the evidence against Moore had been seized during a traffic stop & search that violated the 4th Amendment.

Shortly thereafter, Moore disclosed information to Walters that caused her to go green with anger.  She was so angry that she punched him in the face, knocked him through the wall into the street, and disclosed his confidences to the crowd that gathered after he went crashing through the wall.  As a result, she was disbarred.

No matter, for Jennifer Walters, law was just a side job. Her true calling is as a super hero.

Who is Jennifer Walters when she transforms into her super hero alter ego?