Is it hot & humid?  Yes!  But, you have a choice how you respond to the weather.  One choice is to bemoan it & sit on the couch all day.  Another is to smile at the thought of one more day to wear shorts, flip-flops, and to be outdoors!  Maybe even by the grill with a cold beverage . . . on a Monday!

I choose the latter.

Friday’s questions are here.  The answers follow the honor roll.  Also, you’ll recall that I asked readers to share the events seared into their memories.  I did so in the context of Friday being the anniversary of Princess Diana’s passing.  As always with my readers, the response was fantastic and significantly outnumbered entries into the quiz.

The most-cited events were to be expected:

A few others mentioned by at least 3 people:

Interestingly, but perhaps not surprisingly given the frequent musical references on this blog, many of you will never forget where you were & what you were doing when you learned that a musician died.  Among the musicians whose deaths were mentioned more than once:

Anyhow, thank you again for sharing. I love your stories.  Alas, to make the honor roll, you’ve got to answer the questions!

(responses had to include quiz answers to make the honor roll)

Lawyer called me with an inquiry.  My response included the following words and phrases:  “knowledge,” “violation,”  “substantial question,”  and “honesty, trustworthiness, fitness.”

What did Lawyer call to discuss?

The conflicts rules are NOT relaxed for:

Vermont’s rules do not allow for the automatic screening of lateral transfers.  I’ve blogged on that issue here & here.  Later this month, the PRB will consider a rule change that I’ve recommended that would allow a new firm to screen a lateral transfer from another firm.

Our rules allow for screening when a lawyer moves from government practice to private practice.  In addition, Rule 6.5 relaxes the conflicts rules for lawyers who provide short-term pro bono services under the auspices of a program sponsored by a nonprofit or court.

You’re at a CLE.   You hear me say:  “yes, it’s okay as long as  (1) your client gives informed consent; (2) there is no interference with the lawyer’s independence of professional judgment or with the client-lawyer relationship; and (3) information relating to the representation of your client is protected as required by Rule 1.6.”

What did someone ask if it was okay to do?

Client provides Lawyer with an advance payment of $2,000.  Lawyer has yet to do any work for Client.

Here, A & B are not correct.  The rules do not require standard fee agreements to be reduced to writing.  That being said, I think it’s a bad idea not to.

C is not correct. There’s not enough information in the question to know.  For instance, if the lawyer has complied with Rule 1.5(f) and (g), then the money cannot go into trust.

Many lawyers charge “flat fees” that are “earned upon receipt” and treat the funds as their own upon receipt.  This is ok ONLY IF THE LAWYER COMPLIES WITH RULE 1.5(f) and RULE 1.5(g).  Otherwise, the money must go in trust until earned.

Speaking of the JFK assassination . .  .

. . . Jules Mayer was a lawyer in Dallas.  In 1950, Mayer drew up a will for a client.  The will named Mayer as the executor the client’s estate.

The client died in 1967.  A dispute quickly arose, as the client’s family contended that the client had changed his will on his deathbed to remove Mayer as executor.  Mayer refused to make the change and kept the original will.

In 1991, after a lengthy legal battle, a probate court granted the family’s petition to remove Mayer as executor after concluding that he had mismanaged the estate.

Central to the dispute was gun associated with the JFK assassination.  Mayer’s client bought the gun for $62.50.   After winning their legal battle with Mayer, the client’s family sold the gun for $220,000.  Fortunately for the family, Mayer had safeguarded the gun, holding it in trust for 24 years.

Mayer’s client was Jack Ruby.  The gun was used on Lee Harvey Oswald.  A story of the gun is in this article in the Las Vegas Sun. 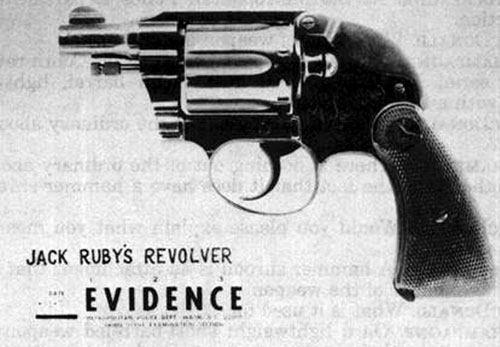